Find out how it all fits together

Across the UK we’re proud to be a single family of Scouts. But to make sure everyone gets the support they need, we are arranged in different groups and units across our regions and nations. Each is looked after by a volunteer manager who supports other volunteers to help young people gain skills for life.

The basic unit of organisation is the Scout Group. This is based in a local community and usually consists of Beaver Scouts, Cub Scouts and Scouts.

Some Groups are larger or smaller depending on where they are located. One Group may contain one or two Beaver Scout Colonies, one or two Cub Scout Packs and a Scout Troop. Another may consist only of one section.

A number of Groups in a certain locality constitute a Scout District. A number of Districts make up a County (or Area in Wales and a Region in Scotland).

All of these Scout units (Groups, Districts, Counties/Areas/Regions) are governed by the Policy, Organisation and Rules of The Scout Association, which provides the framework in which all Scout units operate. 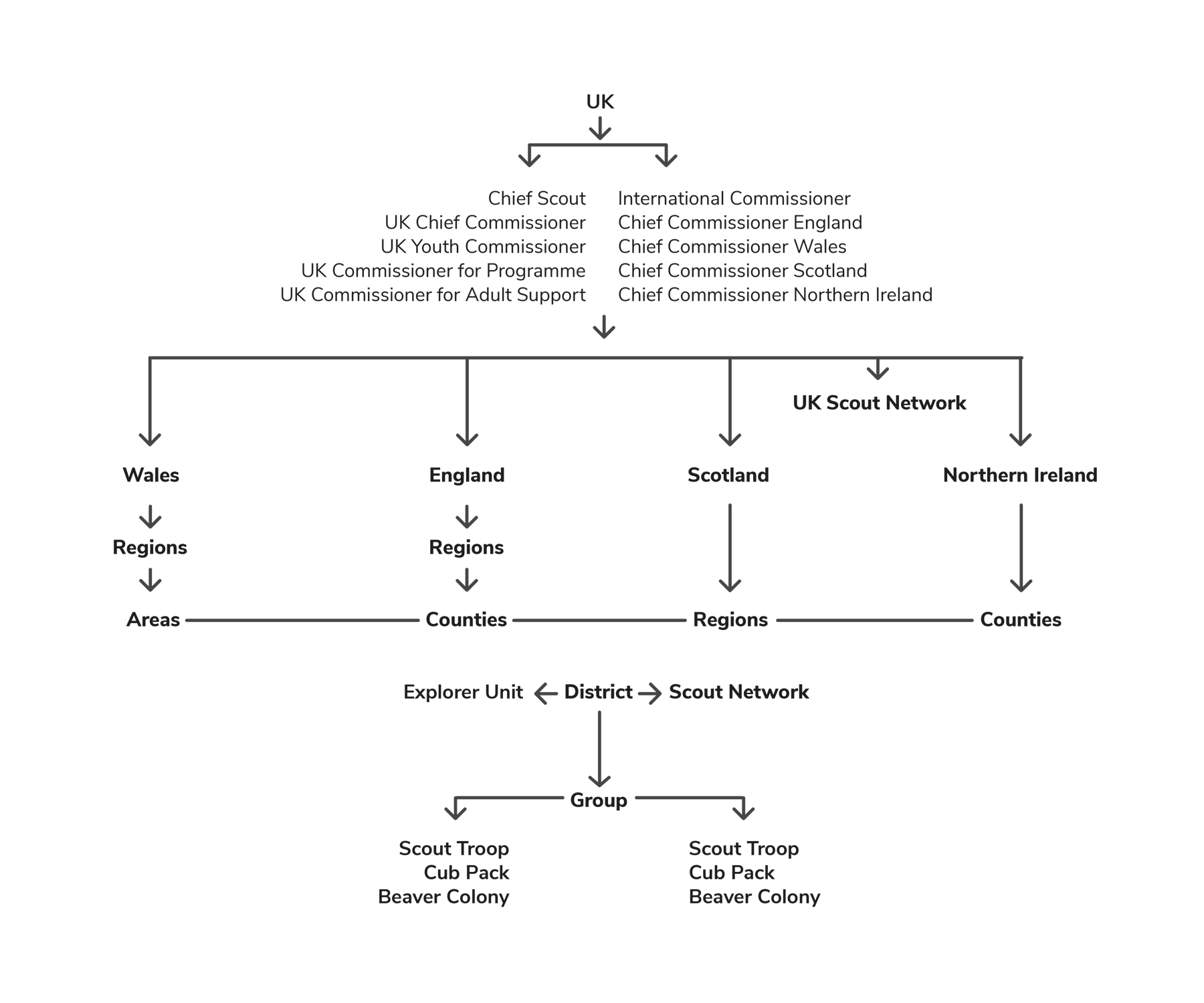 Within a Scout Group, there will be a number of adult leaders, who give their time voluntarily to help the development of young people. The Group is led by the Group Scout Leader, whose job is to co-ordinate the Group’s activities and to ensure continuity and development.

A Group Scout Council meets at least once a year usually for an Annual General Meeting. The Council consists of all the adult Members of the Group, as well as the children’s parents. For more day-to-day matters, the Council has a Group Executive Committee that meets regularly.

A collection of Scout Groups form a Scout District.

The District also has a District Scout Council, comparable in many ways to the Group Council, and a District Executive Committee.

A number of Scout Districts are grouped together to form a Scout County (Area in Wales or Region in Scotland). The County is led by a County Commissioner who is supported by Deputy and Assistant County Commissioners, Advisers and Administrators.

The County Scout Council is run in a similar way to the Group and District Scout Council. Some Counties employ staff, such as a County Secretary or a Development Officer. Many Counties and Areas manage Scout campsites and may also employ a warden or campsite manager.

In Scotland, Scouting is organised into Districts and Regions and there is no direct equivalent to County. Some 'County' functions are the responsibility of Scottish Regions, while others lie with Scottish Districts.

For more information about the structure of Scouting in Scotland, please visit the Scouts Scotland website.